To Pee or Not To Pee

Well, the real “New Year” has begun and it’s time to talk about resolutions. A very common resolution for our pets may just be “this year I will not pee in the house!” I thought we might look at what peeing in the house means and when to be worried; it is an important issue and the number one reason pets are surrendered to the humane society. There are two types of house soiling; normal and abnormal. As a veterinarian, I think it my place to focus on the abnormal which we affectionately call “inappropriate elimination”. In this situation a pet suddenly seems to go back to square one with housetraining. Cats that have never had a problem begin peeing in odd places, like the tub or on the kitchen stove. Dogs, which have been good their whole lives can’t live down the shame of having peed on the rug. Often owners dismiss this as an unfortunate breach in etiquette or even attribute it to spite, but I must say that in the vast majority of these cases there is an underlying and treatable medical problem which can be dangerous if it goes untreated.

The most common cause for loss of bladder control is a bladder infection. In cats this generally relates to crystals in the urine. Crystals occur due to abnormal acidity brought on by diet. Dogs can develop a similar condition yet a common cause of bladder infections in dogs relates to bacteria from skin infections tracking up into the bladder. For this reason they can seem seasonal and they can come and go. In dogs the most common sign of a bladder infection, apart from the peeing, is increased drinking of water but sometimes there is increased hair-loss and the potential for diarrhea. In cats, because those cats with bladder infections tend not to be big drinkers, we see things like decreased activity, decreased food consumption and even grumpiness. Also in boy cats they may stop peeing altogether, a very dangerous condition known as Feline Lower Urinary Tract Disease (FLUTD) or becoming “blocked”. This is a medical emergency and male cats who don’t pee for a day or who are straining to pee should see their vets immediately.

NOW! On to the second kind of peeing in the house: Not knowing any better!!! And here I’m going to turn over the reigns to Tara Davis, the lady who runs our puppy and obedience classes at Centretown Veterinary Hospital to give some really helpful hints on this topic.

Housetraining a new dog is top priority for owners. It can be relatively easy if a few simple steps are followed and you think like a dog. Crate training or restricted access to the home is the best first step. In the K-9 world the rules of where a pack member is allowed to go, rest, eat and eliminate is all dictated by the leader, you as your dog’s owner have the right to this ruling. The rule of thumb is a dog can be humanely confined to a crate or area in the home for one hour longer than he is old up to and no longer than 8-10hrs, (i.e.) a 4mth old pup can comfortably stay in a crate for up to 5hrs with an older or adult dog being comfortable 6 to 8hrs. When should be potty break time? After waking up from a long nights sleep, nap, or shortly after having something to eat or drink and before and after extended periods of exercise and play, just to list a few.

The next element of housetraining that many owners neglect is, “taking the dog” out rather than “letting the dog” out. Owners all too often open the back door to the yard and “let the dog” out while they watch from the house sincerely believing that the dog knows why he out there. Owners are then discouraged only to let the dog in and then have him eliminate indoors. From the dog’s perspective he was out there to enjoy all the sights, smells, places to explore and if he went to the bathroom then it was a bonus. A dog should always be taken outdoors on leash to a choice location to eliminate then he should be given your rewards of attention, a quick cookie, playtime or best of all a good long walk. Controlled and restricted access to the home initially until behaviours and routines are established will create a happy and harmonious relationship between you and your new dog. 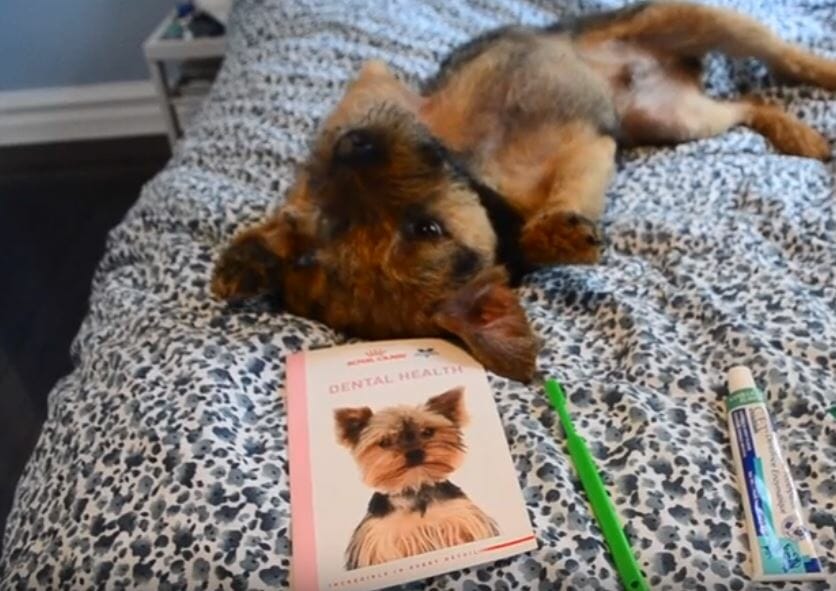 One of our RVTs Emily and her fur baby Archie show us how to properly take care of your pet's teeth!